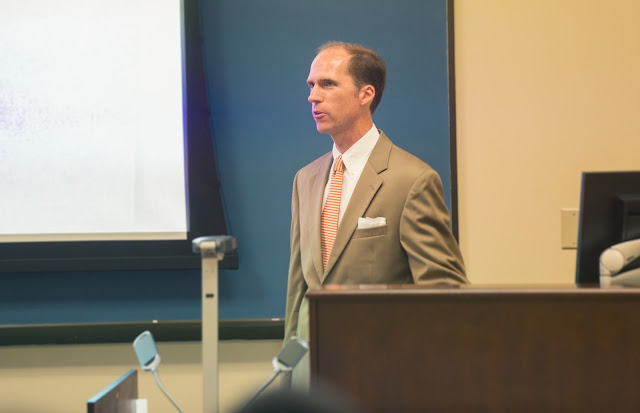 While at the conference, Dean Gantt delivered a CLE presentation on the ABA's new Model Rule of Professional Conduct 8.4(g), adopted in August 2016 by the ABA's House of Delegates.  The comment period prior to adoption generated over 450 comment letters, most of which were opposed to the rule change.

The new rule, which has generated much debate, makes it professional misconduct for a lawyer to knowingly engage in harassment or discrimination in conduct related to the practice of law on the basis of eleven protected characteristics.


It is professional misconduct for a lawyer to:
(g) engage in conduct that the lawyer knows or reasonably should know is harassment or discrimination on the basis of race, sex, religion, national origin, ethnicity, disability, age, sexual orientation, gender identity, marital status or socioeconomic status in conduct related to the practice of law. This paragraph does not limit the ability of a lawyer to accept, decline or withdraw from a representation in accordance with Rule 1.16. This paragraph does not preclude legitimate advice or advocacy consistent with these Rules.


The full text of Rule 8.4 as amended is available here.

In the presentation, Dean Gantt explained the details of the adopted rule and associated comments and the ABA's rationale for the new rule as stated in the accompanying ABA report.  He then discussed how the rule poses concerns for attorneys’ First Amendment rights and how concerned attorneys should emphasize specific language from the rule and comments in order to protect those rights.  He also described the state reactions to the rule, specifically, that many states have considered adopting the rule but only one, Vermont, had done so as of October 2017.

The presentation sparked many questions and points of discussion among the attendees, many of whom expressed concern over how the rule might impinge upon attorneys' religious liberties.