CEFLER founders Dean Natt Gantt and Professor Ben Madison recently performed original research in two separate surveys--one designed to ask a large number of law students their primary goals, and the other seeking to have students self-assess their degree of self-directedness. 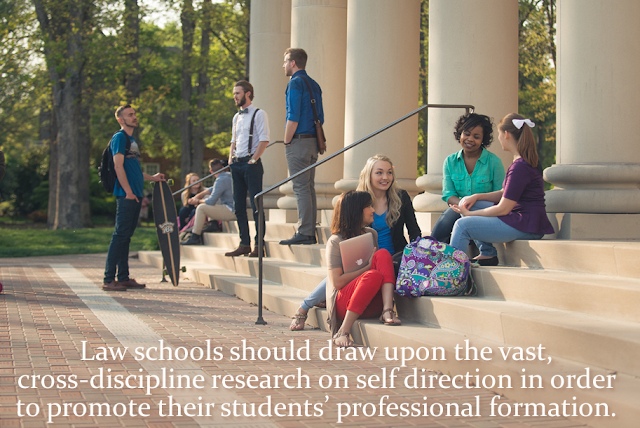 The first survey, of a large number of students at a variety of law schools across the nation, showed that students chose--after passing the Bar exam--the goal of "meaningful employment" as the single most sought goal. The finding is significant because another choice in the survey allowed students to choose income to pay debts and for living, but students still chose the "meaningful employment" option at a higher rate than purely income.

The authors took the results of these surveys and discuss their implications. Students want meaningful employment. Nevertheless, many if not most have not recognized the need to make a plan to pursue such employment. Most students have not identified the areas of law that best match their strengths and values. Moreover, most students do not have an intentional plan for exploring roles in the legal profession that would match their strengths, values, and interests. Only a small number of students have a written plan.

The authors explore how law schools can help students in seeking their goal by cultivating self-direction and development of a plan to move toward their goal. The article discusses efforts at a number of law schools to implement courses, coaching of students by faculty, and the like as efforts to help students in this regard. The authors see the development of self-directed behavior, or self-regulated behavior, as a component of the development of each law student's professional identity. Recommendations for further action, and further research, are included.