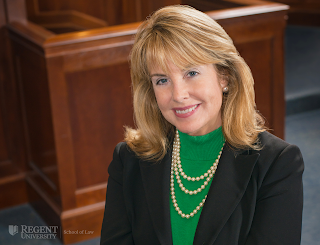 Violent crime, sexual abuse and broken families are harsh realities the real world offers on a daily basis. Some Regent University graduates will serve in careers that demand close interaction with those involved in challenging situations. While it's impossible to perfectly prepare anyone for these tragedies, The Robertson School of Government (RSG) invited Judge Patricia L. West, distinguished professor, to share stories of ethical challenges she's faced in her career, and how she handled them from a Christian perspective.  Judge West is also the Associate Dean of Regent Law Career, Alumni & Student Services, and Distinguished Professor at Regent Law.

"God doesn't want us to all be together in a little clump, pat ourselves on the back, and tell each other what great Christians we are," said West. "He wants us to be out there in the darkness. That's the only way that we can ever win anyone."

"God has granted me the ability to see all of this awful stuff, hate that it happens, but not get jaded by it," said West. "I know it's there, and these things happen, and I cannot explain it apart from God's grace. The things that I've seen and talked about today are a side of the world that most people don't even need to know about, unless they're working in it and want to try to help with it."

As a prosecutor, West counseled and nurtured victims. As a judge, she delivered justice to convicted criminals. After serving sentences, some would come forward and thank her.

"I'm sure a lot of the people I locked up didn't really know I was hoping that I was really making a positive difference in their life, but that was my prayer always, that they would go into prison, and a prison ministry might change their life. They needed to be punished, but my deepest desire, when I imposed those sentences, was that they would come out better people."